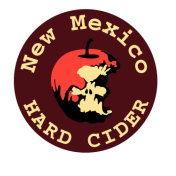 Born in Galisteo, Craig Moya lives in Santa Fe with his wife, Heather, and three kids, Holly, Aiden, and Noelle. After moving to Santa Fe, he worked for the Santa Fe County Fire Department and began to develop the idea for New Mexico Hard Cider. In 2014, after Moya had been with the fire department for five years, New Mexico Hard Cider had grown large enough that he was able to expand the business to full time. It began in 2013 when a friend asked me to help him pick his grandmother’s apple and pear trees before the fruit dropped in her yard. It ended up being close to three or four hundred pounds of fruit and we were trying to figure out what to do with it. All the normal things went through our minds, until we ultimately decided to ferment it to drink and had to figure out how to store that quantity of juice. I began to do research into cider and discovered it was an up-and-coming beverage and a very niche product at that point. From there, everything started to fall into place. It turned out my uncle had an orchard in Villanueva that was overgrown and needed work. We began to restore that orchard while I home-brewed and waited for federal and state licensing to come through. Once we had the licenses, we obtained funding for equipment and to set up a taproom in downtown Santa Fe.